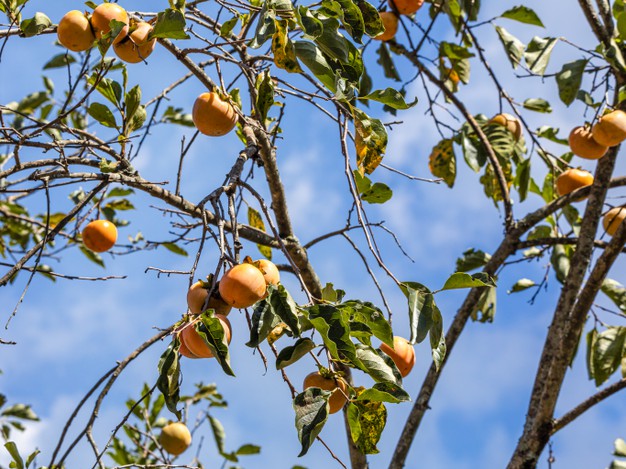 Sharon fruit is the trade name for a persimmon variety, the astringency of which has been artificially removed so that it can be eaten at all stages of ripening. They are similar in shape to tomatoes, on average 5-8 centimeters in diameter, at the top of a green or brown calyx. Their thin, waxy edible skin is pale to reddish-orange when ripe, and the orange flesh is almost always pitted, pathless, and without any bitterness.

It offers a sweet taste even if it is still immature and firm, with a crunchy and juicy texture. As it ripens, the fruit softens to a custard consistency, taking on a more complex sweet taste with hints of brown sugar.

Sharon fruits are available during the fall and winter months.

Sharon fruits are botanically classified as Diospyros kaki, Japanese persimmon, and belong to the ebony family. It can be referred to by several other names, including Korean Mango and Triumph, an astringent persimmon that is sold as a Sharon fruit after chemically removing the astringency. Sharon fruits are harvested and processed using modified atmosphere packaging, or MAP for short.

The fruits are stored in low oxygen, high carbon dioxide environment for 24 hours to facilitate natural ripening and remove astringency. However, this controlled atmospheric storage is not a new method; the evidence suggests that the harvested crops have been stored under controlled conditions since the Egyptian period.

Sharon fruits are high in fiber, about twice as fiber as an apple, and are rich in minerals such as sodium, magnesium, calcium, and iron. They are widely known for their high levels of beta-carotene, which is found in both skin and meat, making them an excellent source of vitamins A and C. They are also rich in glucose and protein.

Sharon fruits can be eaten fresh, used in sweet or savory dishes, and canned both dried and canned. It can be eaten whole at any stage of ripening, although the pulp may become translucent as it ripens, but still edible. Add fresh Sharon fruit to salads, sauté and serve with mascarpone cream, or use in baking recipes.

Sharon fruits can be made into sauces, jams, chutneys, marinades, and puddings, where they are often combined with spices such as cinnamon, ginger, nutmeg, allspice, and cloves. Sharon fruits complement grilled shellfish and pork, and pair well with endive, coriander, courgette, figs, pears, olive oil, softer cheeses like Vallejo and goat cheese, or aged cheeses like manchego and parmesan.

Looking back at the origin of the Sharon fruit, it can be said that the Japanese persimmon, in general, is the homeland of China, where it has been grown since about 1000 BC. E. Japanese persimmon quickly spread from China to Japan and Korea, where since then many varieties have been developed over the centuries.

They were introduced to Europe sometime in the 1600s and to the United States in the mid-1800s, although the first documented photograph of a mature Sharon fetus in America appeared much later, in 1913. Spain and South Africa, with a small scale in California and the Gulf countries, mostly in home gardens. Contact us for guest posting service.

What is an ED Trial Pack, and Which One to Choose?

The Power of Zomedica Corp: Why this Company is Worth Watching